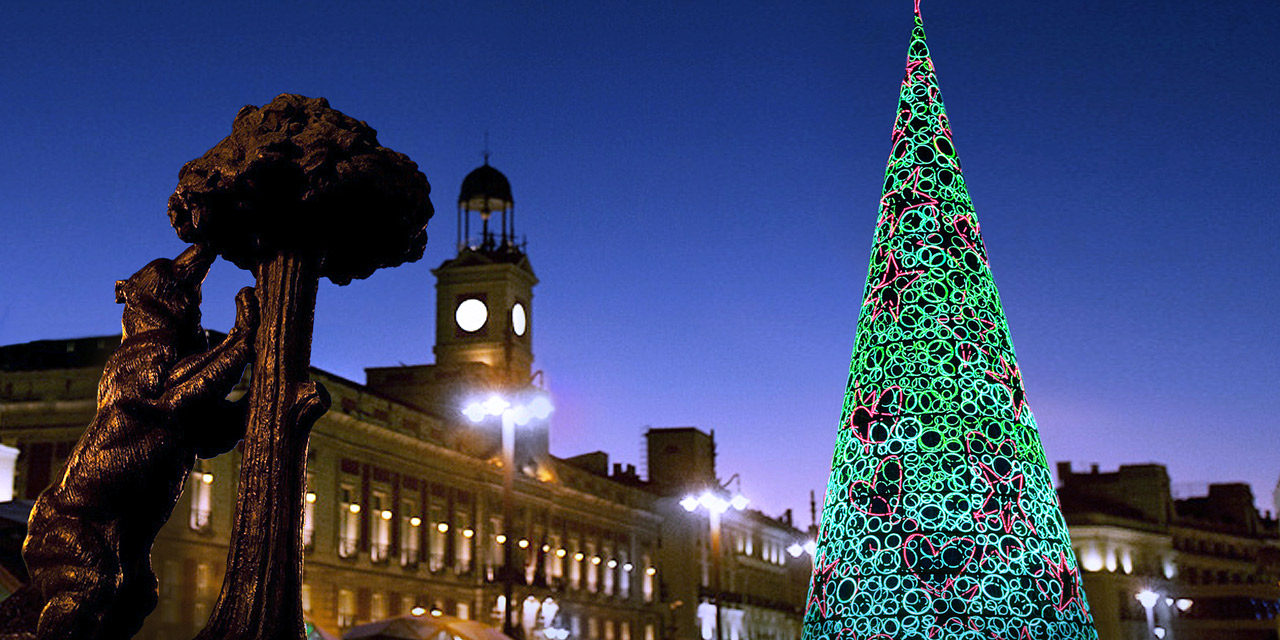 Spectacular Christmas lights, guided tours and special shows for children are just some of the attractions to be found in Madrid during the festive season (2012):

Like every year, things are changing in Madrid with the approach of Christmas. Multi-coloured light displays by some of the country’s leading designers are filling the capital’s streets, a host of shows and family activities are on offer, confectioners are preparing special sweet treats for the season and shoppers can already find a wealth of interesting products in the city’s stores.

Madrid Visitors & Convention Bureau is also offering special seasonal tours as part of its Official Guided Tours programme, so that visitors can enjoy local traditions and the festive atmosphere in the city. Three tours are available in Spanish and English. “Christmas Traditions” and “Historical Nativity Scenes” are walking tours, while “Christmas by Bike” is a special Christmas tour for cyclists, taking in the capital’s most emblematic spots.

Residents and visitors alike will enjoy the city’s specially designed Christmas illuminations. Complying with the strictest environmental and energy efficiency standards, they have become one of the season’s greatest attractions. This year the display centres on the city’s main shopping thoroughfares.

Over 45 sites are specially lit and Christmas lights run the length of over 25 streets. This spectacular display of light and colour is completed by the illumination of some of the city’s most famous buildings and icons, like the City Council building and Cibeles Fountain, which will be lit up in red and green this year. The designers include architects Ben Busche and Isabel Barbas, responsible for the field of spring flowers in Plaza Mayor, the dewdrops in Calle Mayor and the leaves in the Literary Quarter. Ben Busche also designed the lighting along Gran Vía, which recreates an imaginary skyline of skyscrapers.

Ágatha Ruiz de la Prada’s impressive Christmas tree takes pride of place in Puerta del Sol, opposite the clock which traditionally sees out the old year and rings in the new for Madrid and the rest of Spain. Huge fir trees are also to be found in the Jardines del Descubrimiento, Plaza de España, Glorieta del Emperador Carlos V, Red de San Luis and CentroCentro. Plaza de Chueca is the setting for another original light display, the sparkling strips designed by architects Sergio Sebastián and Patricia de Miguel. Other designers who have contributed to this year’s illuminations are Purificación García, creator of the display in Calle de Goya, Ana Locking (Fuencarral and Montera), Ángel Schelesser (Princesa), Juanjo Oliva (Jorge Juan), Hannibal Laguna (Ortega y Gasset), Teresa Sapey (Serrano and Hortaleza) and Turégano (Velázquez). The Christmas lights will be on until 6 January 2013, from 6pm to 8pm on Mondays, Tuesdays and Wednesdays, from 6pm to 11pm on Thursdays and Sundays, and from 6pm to midnight on Fridays and Saturdays. On 5, 6, 7 and 8 December, the lights will be on from 6pm to midnight, on 24 December and 5 January from 6pm to 3am, on 25 December and 1 January from 6pm to 11pm, and on 31 December from 6pm to 6am.

The “Christmas Traditions ” tour features traditional Christmas sweets, gifts and decorations. The visit takes in the clock at Puerta del Sol and the stalls in Plaza Mayor, as well as the delicious turrones and roscones available from Casa Mira and El Riojano. The “Historical Nativity Scenes” tour is ideal for those who wish to learn more about the city’s best known cribs. It includes visits to San Ginés parish church, Las Jerónimas monastery, and San Miguel basilica.

“Christmas by bike” allows cyclists to admire the original designs and spectacular lights to be seen in Madrid during the festive season, particularly those in the Hapsburg and Bourbon districts. The tour starts at 7pm. For the little ones there is a route based on the story “La aventura de Ratón Pérez y El Rey Buby” and a treasure hunt, “Adivina Madrid”. Both routes are in Spanish.

Activities for children play an important role in the cultural calendar at this time of year. These include Kids City at the Conde Duque cultural centre, the Neapolitan Nativity scene at CentroCentro, and the traditional Christmas show at Teatro Circo Price. Other events not to be missed are the Christmas concerts at a number of the city’s churches and the Three Kings Parade on the evening of 5 January. Details of all guided tours, cultural and leisure activities are available on the esMADRID.com website.