aiberlin begins offering non-stop flights between Berlin and Chicago beginning March 23, 2013, making airberlin the only airline to connect the two major cities with a non-stop flight. 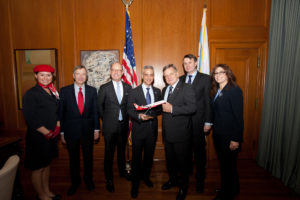 In anticipation of this first, Mayor of Chicago Rahm Emanuel welcomed the commitment to the US made by Germany’s second largest airline at a meeting with Hartmut Mehdorn, CEO airberlin, Paul Gregorowitsch, CCO airberlin and Burkhard Kieker, CEO visitBerlin on November 30, 2012.

“It is an honor to welcome a new airline to our great city that will bring business and leisure customers to the nation’s Heartland,” said Chicago Mayor Rahm Emanuel. “airberlin will provide service from Chicago to Berlin that will compliment new American Airlines service from Chicago to Dusseldorf starting next April. Any time a new international route is added at O’Hare, it benefits the city. New flights mean new jobs and that means more opportunity for all the citizens of Chicago,” he added.

Hartmut Mehdorn, CEO airberlin, said: “airberlin and the United States of America are traditionally linked by a close friendship. In 1978, the American pilot Kim Lundgren founded airberlin, known then as Air Berlin Inc., in the state of Oregon. This makes our efforts to further consolidate our position in the USA with our new non-stop flight from Berlin to Chicago also a matter that is very close to our hearts. What’s more, we have restructured our entire US network and will be specifically strengthening our presence next year in Chicago, New York, Los Angeles and Miami.”

Paul Gregorowitsch, CCO airberlin, explained: “Over the past two years airberlin has taken decisive steps towards further growth in the USA: membership of the oneworld® alliance since March 2012 and increased exploitation of network synergies through the sustained expansion of codeshare agreements with American Airlines. The addition of the new Chicago flight represents a logical next step in this strategy since Chicago is also one of the biggest hubs of our oneworld partner American Airlines. Thanks to this network expansion, guests of both airberlin and American Airlines can enjoy a wide range of connections both in Europe and the USA.”

“Tourism and business relations between the USA and Germany are booming. A flight connection to Chicago, situated in the heart of America, is something we have desperately needed”, said visitBerlin CEO Burkhard Kieker. “Chicago is one of the biggest hubs of the oneworld airline alliance. airberlin and visitBerlin are working closely together to ensure the success of this new route.”

The visit to airberlin’s new destination of Chicago marks the end of a joint two-day trip to the USA by airberlin and visitBerlin. The focus of the trip was the announcement of the new route to and from Chicago and the restructuring of the airberlin network as of summer 2013.

This means that as of March 2013, airberlin’s network in the USA will include a total of five destinations: Chicago, Fort Myers, Los Angeles, Miami and New York. The changes to the schedule bear the very hallmarks of increased efficiency. This does not mean a reduction in capacity; rather, the changes represent a capacity shift, giving the airline’s profile more of an edge in strategic core markets. With this in mind, airberlin is stepping up its provision of non-stop flights to and from New York-JFK, Los Angeles and Miami as of May 2013. At the same time, it is cancelling the seasonal non-stop flights from Dusseldorf to Las Vegas, San Francisco and Vancouver.

As of 23rd March 2013, just in time for the start of the Easter holidays, there will initially be flights every Monday, Thursday and Saturday from Berlin to Chicago. At the start of the summer schedule on 1st May 2013, airberlin will then increase the number of non-stop flights per week from three to five, adding services from the German capital to the Windy City on Wednesdays and Sundays. Feeder flights for the Berlin-Chicago flight are currently set to operate from eight German cities and a further eleven European destinations, such as Vienna, Zurich, Helsinki, Gothenburg, Oslo and Stockholm as well as from Russia. Krakow and Warsaw in particular are extremely well connected to the Windy City. In fact, airberlin is adding the connection to Warsaw to its schedule at the same time as the Chicago connection on 23rd March 2013. This means that airberlin will celebrate two inaugural flights on this date.

The new non-stop flight will depart from Berlin at 10:00 and land at Chicago O’Hare International Airport at 12:10. In the opposite direction, the flight will depart from Chicago at 15:25 and arrive back in Berlin at 7:00 the following day (all times indicated are local times). The flight will be operated using an Airbus A330-200 with two-class configuration (Economy and Business Class). The flight time from Berlin to Chicago is nine hours and ten minutes.

Mayor of London unveils his vision for London’s future