The new business and economy class seating sections in Iberia’s long-haul fleet are being introduced with the incorporation of eight new Airbus A330/300s – the first one arrived last February 2013 and the eighth will join the fleet in April 2014. The twin-engine transcontinental aircraft consume about 15% less fuel than the four-engine aircraft they replace, for a substantial cost saving.

The new Airbus A330/300s come with 36 Business Plus class and 242 Economy class seats. This aircraft is basically flying to the US destinations of Iberia – Miami, New York, Chicago and, in the summer season, Boston. 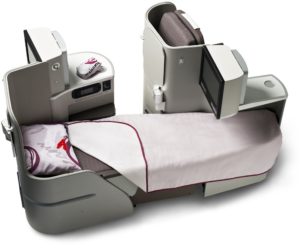 Iberia’s 17 Airbus A340/600s are also being refitted with the new cabins. Six units are already in service and two more will come out of Iberia’s hangars. The retrofit of the whole A340/600 fleet will be finished in the first half of 2014. The configuration is 46 Business Plus seats and 300 Economy class seats. The A340-600 flies to the US and Latin America. The four retrofitted A340/600 have already flown to Buenos Aires, Sao Paulo, Santiago de Chile, Bogotá and Lima.

The extra-wide Business Plus seats unfold into perfectly flat beds nearly two metres long, and are designed and position to offer the greatest comfort and privacy to premium passenger, as well as direct access to the aisle from each seats.

The new Business Plus class entertainment system is more intuitive and easier to use, centring on a 15.4” touch screen –50% larger than the current one- and resembling the new tablet computers in functional terms. There is also a 4.2” touch screen remote with a virtual keyboard, which can also be used to make telephone calls and to send and receive text message. Content, changed every month, include some 80 feature films and television series and documentaries in a number of languages, some 200 musical options, interactive 3D games, etc.

Iberia will soon add Wi-fi and GSM texting capability for all passengers on long-haul flights, plus power and communications jacks in all seats.

The Business Plus seating section features lightness and clarity and lighting changes with each phase of the flight. Reading lights are more powerful, and passengers have more space for their belongings.